The winter 2012 issue of the Journal of the History of the Behavioral Sciences (JHBS) has just been released online. Regular readers of JHBS may notice something different about the journal this year. The journal’s cover has been redesigned to now feature an image related to one of the articles included in the issue (right). Included in this first issue of 2012 are articles on the place of extraordinary psychological phenomena in the discipline, the work of Timothy Leary post-Harvard, Kurt Goldstein’s neurolingustic research, and the revival, in sociology, of interest in Max Weber’s work during the 1970s and 1980s. Full titles, authors, and abstracts follow below.

“The making of extraordinary psychological phenomena,” by Peter Lamont. The abstract reads,

This article considers the extraordinary phenomena that have been central to unorthodox areas of psychological knowledge. It shows how even the agreed facts relating to mesmerism, spiritualism, psychical research, and parapsychology have been framed as evidence both for and against the reality of the phenomena. It argues that these disputes can be seen as a means through which beliefs have been formulated and maintained in the face of potentially challenging evidence. It also shows how these disputes appealed to different forms of expertise, and that both sides appealed to belief in various ways as part of the ongoing dispute about both the facts and expertise. Finally, it shows how, when a formal Psychology of paranormal belief emerged in the twentieth century, it took two different forms, each reflecting one side of the ongoing dispute about the reality of the phenomena.

The psychologist Timothy Leary (1920–1996), an iconic cultural figure in the United States in the 1960s and afterward, has received comparatively scant attention in the history of psychology. END_OF_DOCUMENT_TOKEN_TO_BE_REPLACED 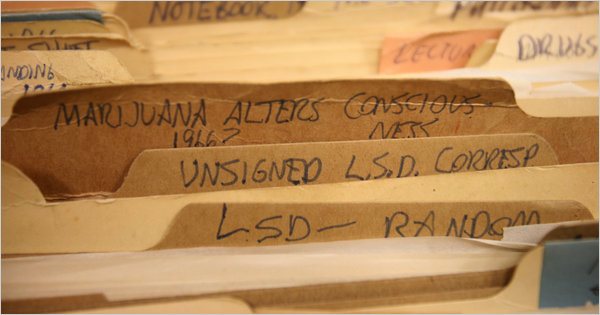 The New York Public Library (NYPL) has purchased the papers (above) of psychologist and LSD proponent Timothy Leary. The library purchased the papers from Leary’s estate for $900,000 some of which will be donated back to the NYPL to help with the costs associated with processing the collection.

As announced by the New York Times, Leary’s papers consist of

335 boxes of papers, videotapes, photographs and more … The material documents the evolution of the tweedy middle-aged academic into a drug guru, international outlaw, gubernatorial candidate, computer software designer and progenitor of the Me Decade’s self-absorbed interest in self-help.

The archive will not be available to the public or scholars for 18 to 24 months, as the library organizes the papers. A preview of the collection, however, reveals a rich record not only of Leary’s tumultuous life but also of the lives of many significant cultural figures in the ’60, ’70s and ’80s.

More details on Leary’s life and work, including photographs of some of the collection’s items, can be found here. 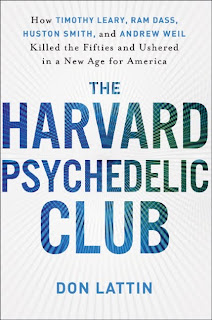 The New York Times has reviewed a just released book on psychedelic research at Harvard University in the 1960s: The Harvard Psychedelic Club: How Timothy Leary, Ram Dass, Huston Smith and Andrew Weil Killed the Fifties and Ushered In a New Age for America. Authored by freelance journalist and religion writer, Don Lattin The Harvard Psychedelic Club’s title calls to mind Louis Menand’s 2001 book The Metaphysical Club, also about psychology at Harvard, though in an earlier period.

Lattin’s book details the exploits of Timothy Leary, Richard Alpert, Andrew Weil and Huston Smith at Harvard in the early 1960s, as well as their lives after Harvard. As the NYT recounts,

In 1963 Leary and Mr. Alpert were kicked out of Harvard for their exploits, which included giving drugs to undergraduates. One of the men behind their expulsion was none other than Andrew Weil, still an undergraduate. Jealous at not being fully admitted into their world or, Mr. Lattin suggests, being given the best drugs, Mr. Weil helped engineer an exposé of Leary and Mr. Alpert in The Harvard Crimson. He took the pair down, Mr. Lattin writes, “with the zeal of a jilted lover.” The older men never fully forgave him.

Mr. Lattin tracks all four men as they go their separate ways, trailing stardust and grievances. Timothy Leary became, well, Timothy Leary, the Johnny Appleseed of the psychedelic age. Richard Alpert traveled to India, came back as Ram Dass and wrote the counterculture bible “Be Here Now.” Andrew Weil, with his bald head and Santa Claus beard, would become a benevolent alternative lifestyle guru, a man whose work combines Eastern and Western medical ideas. His empire now includes not just best-selling books and herbal supplements but lines of olive oil and cookware. Mr. Smith, the most serious academic of the group, became critical of Leary. He found Leary’s slogan — “Tune In, Turn On, Drop Out” — “too negative to command respect.”

Although the NYT review of The Harvard Psychedelic Club is largely favourable, the reviewer takes issue with some of Lattin’s stylistic decisions, including his decision to invent some of the dialogue that appears in the book. Despite the problematically concocted dialogue, the reviewer found the story engrossing.

As described on its dustjacket, The Harvard Psychedelic Club,

is the story of how three brilliant scholars and one ambitious freshman crossed paths in the early sixties at a Harvard-sponsored psychedelic-drug research project, transforming their lives and American culture and launching the mind/body/spirit movement that inspired the explosion of yoga classes, organic produce, and alternative medicine.

The four men came together in a time of upheaval and experimentation, and their exploration of an expanded consciousness set the stage for the social, spiritual, sexual, and psychological revolution of the 1960s. Timothy Leary would be the rebellious trickster, the premier proponent of the therapeutic and spiritual benefits of LSD, advising a generation to “turn on, tune in, and drop out.” Richard Alpert would be the seeker, traveling to India and returning to America as Ram Dass, reborn as a spiritual leader with his “Be Here Now” mantra, inspiring a restless army of spiritual pilgrims. Huston Smith would be the teacher, practicing every world religion, introducing the Dalai Lama to the West, and educating generations of Americans to adopt a more tolerant, inclusive attitude toward other cultures’ beliefs. And young Andrew Weil would be the healer, becoming the undisputed leader of alternative medicine, devoting his life to the holistic reformation of the American health care system.

It was meant to be a time of joy, of peace, and of love, but behind the scenes lurked backstabbing, jealousy, and outright betrayal. In spite of their personal conflicts, the members of the Harvard Psychedelic Club would forever change the way Americans view religion and practice medicine, and the very way we look at body and soul.