The Society for the History of Psychology (Division 26 of the American Psychological Association) has issued its Call for Submissions for the 2018 meeting in San Francisco, August 9-12th. (Full disclosure: Elissa Rodkey and I are the 2018 Co-Program Chairs.) This year’s theme is Hidden Figures as we hope to highlight some the unacknowledged, unrecognized, or otherwise invisible figures in psychology’s past. Full details, including some of our other themes for 2018, as well as submission deadlines, are included in the full call for submissions below.

More details on submissions and the online submission system can be found here. 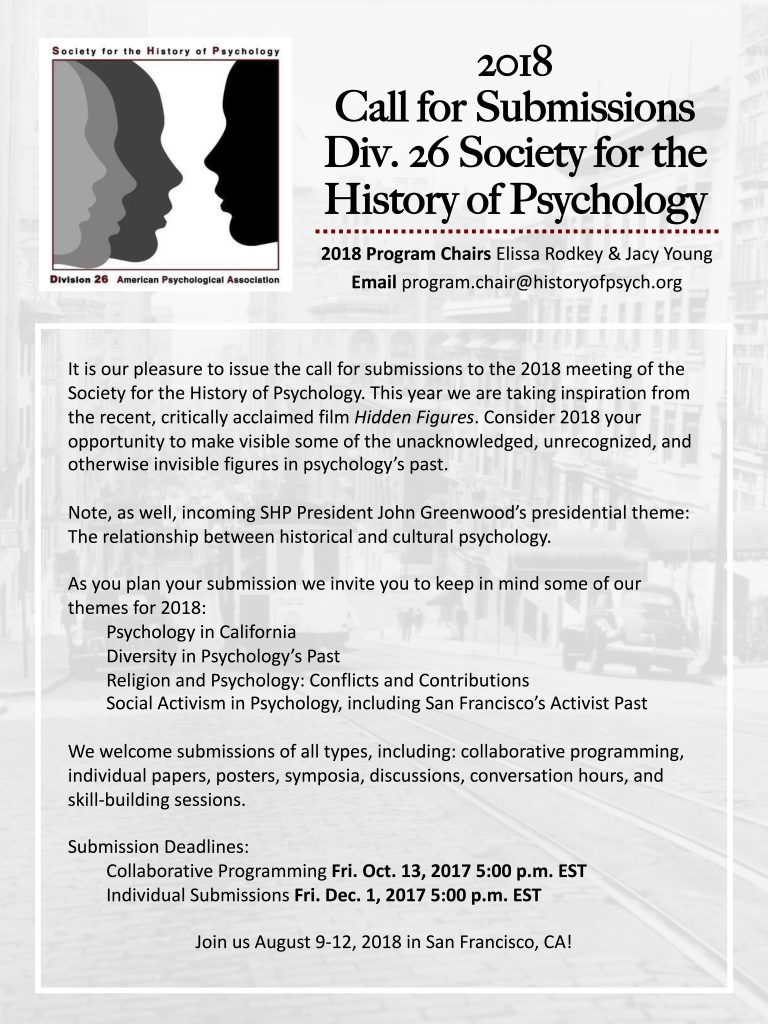 The Society for the History of Psychology (SHP), Division 26 of the American Psychological Association, has issued a reminder of the submission deadline for their 2016 meeting. SHP will meet as part of the 2016 annual convention of the American Psychological Association, which will be held in Denver, Colorado, August 4-7, 2016. The full details follow below.

We welcome inclusive proposals for symposia, individual papers, posters, and conversation hours related to the history or historiography of psychology, or to the human sciences more generally. An award is given for best student paper.

Dr. James Lamiell’s Presidential Theme this year highlights the problem of the diminishing profile of graduate-level coursework in history and philosophy of psychology within the overall education of our Ph.D.s. Critical discussion of this state of affairs is encouraged (but not required).

All proposals are to be submitted online here: http://www.apa.org/convention/proposals.aspx?tab=2

The full call for proposals and more information regarding submissions can be found here: http://www.apa.org/convention/convention-proposals.pdf

It is undeniable that scientific communication has been heavily influenced by new information technologies (IT). A continuing phenomenon the world over is the success of ”science blogs”, which have thrived in the struggle for space within traditional science journalism.

Many examples science blogs and bloggers could be found at the 8th World Conference of Science Journalists (WCSJ) held in Helsinki (Finland) last June, from the 24th to 28th. Approximately 800 participants from 80 countries attended the Conference and discussed the progress achieved by science blogs in the last several years. In the blog world, some standouts include figures like Ed Yong, who runs the blog Not Exactly Rocket Science, and Carl Zimmer, who is responsible for the The Loom. Paul Krugman, who won the Nobel prize (Economics), regularly explores economic science in his blog The Conscience of a Liberal. These authors are also active on Twitter and Facebook, another set of ITs that are becoming popular tools of scientific communication.

In the History of Psychology (HoP) we can observe this same kind of effort at online science communication. For instance, the blog Advances in the History of Psychology (AHP) has been running since 2007. AHP began as an experiment in communicating news, notes, and resources relevant to the history of psychology to as broad an audience as possible. In recent years this mandate has seen AHP expand onto Facebook and Twitter.

Another example of psychology-specific history of science blogging is the largely Portuguese/Spanish language Rede Iberoamericana de Pesquisadores em História da Psicologia/Iberoamerican Network of Researchers on History of Psychology (RIPeHP) blog. The blog has been running since 2011 and it is associated with the RIPeHP, a group of  HoP researchers from different countries of Iberoamerica. RIPeHP is also active on Facebook and it is hoping to be onto Twitter soon.

Both blogs provide readers with information on many aspects on HoP, such as: new issues from scientific journals; call for papers; interviews; conferences; etc. This helps researchers from different parts of the world get new information about the field and can also contribute to bringing researchers together. These blogs also provide valuable resources for teachers of HoP, while also (hopefully) raising the profile of the field within the larger psychology and history of science communities.

There are other excellent related blogs, whose content is both more focused and more broad than just HoP. For instance, the Center for the History of Psychology (CHP) blog, highlights primary sources and interesting information about the archival collections of the CHP. They are also online on Facebook and Twitter. The blog H-madness focuses on the related field of the history of psychiatry, while the blog MindHacks explores developments in psychology more broadly and regularly features HoP content among its postings.

Other efforts at disseminating HoP have by passed blogs altogether, employing Facebook and Twitter as their primary means of communication. These include the Society for the History of Psychology (Division 26 of the American Psychological Association), which communicates primarily through its Facebook page, and Psychology’s Feminist Voices, a multi-media internet archive, which has both a Facebook and Twitter presence.

Maybe, in the next couples of years, we will see some psychology bloggers in conferences like the WCSJ, or scientific communication working groups at HoP meetings. In the meantime, keep reading!

YouTube’s CreativeCommonsTV has posted a clip of University of Oregon psychologist Lester F. Beck’s Photographic Studies in Hypnosis. The footage from 1938 is described as,

This silent film shows a woman being hypnotized and includes both pre and post hypnosis scenes. The hypnotist demonstrates how a patient’s mind can be manipulated as he pinpricks and burns his patient with controlled and suggestive reactions. This unrehearsed session of hypnosis features two students whom are given false memories. The pair are then tested about their memories and are given some basic psychological tests to see the effects of the hypnosis.

Tip o’ the Hat to the Society for the History of Psychology Facebook page for bringing this film to our attention. Congratulations to the Society for the History of Psychology‘s 2013 award winners: Saulo de Freitas Araujo (left), Joshua Clegg (right), Jill Morawski (centre), and Graham Richards! Freitas Araujo and Clegg have been awarded the Society’s Early Career Award, while Morawski and Richards are recipients of the Lifetime Achievement Award. The awards will be officially conferred during the Society’s programming at the American Psychological Association‘s Annual Convention in Honolulu, Hawaii, July 31st-August 4th. The Society’s convention programming can be found online here.