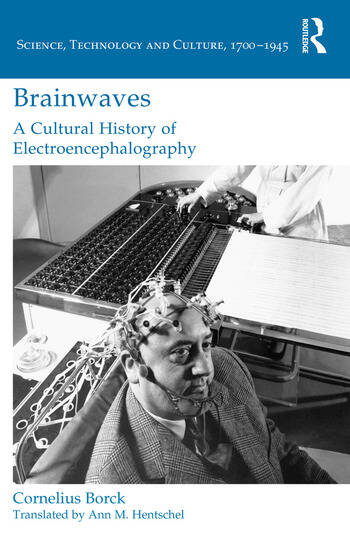 Another book to add to your to reading list! Cornelius Borck’s Brainwaves: A Cultural History of Electroencephalography was recently published by Routledge. The book is described as follows:

In the history of brain research, the prospect of visualizing brain processes has continually awakened great expectations. In this study, Cornelius Borck focuses on a recording technique developed by the German physiologist Hans Berger to register electric brain currents; a technique that was expected to allow the brain to write in its own language, and which would reveal the way the brain worked. Borck traces the numerous contradictory interpretations of electroencephalography, from Berger’s experiments and his publication of the first human EEG in 1929, to its international proliferation and consolidation as a clinical diagnostic method in the mid-twentieth century. Borck’s thesis is that the language of the brain takes on specific contours depending on the local investigative cultures, from whose conflicting views emerged a new scientific object: the electric brain.

As reported over on the h-madness blog the Winter 2016 special issue of  L’esprit créateur is dedicated to “L’esprit (dé)réglé: Literature, Science, and the Life of the Mind in France, 1700–1900.” Full details follow below.

“L’esprit (dé)réglé: Literature, Science, and the Life of the Mind in France, 1700–1900,” by Florence Vatan and Anne Vila. The abstract reads,

The case studies presented in this special issue illustrate the unique appeal that the puzzle of the mind exerted across fields of knowledge in the eighteenth and nineteenth centuries. They highlight the diversity of approaches and perspectives that the exploration of the mind elicited in literature, philosophy, and the sciences de l’homme. They also testify to the conceptual challenges and persistent nebulousness that surrounded the notion of esprit and its close associates. That fluidity of meaning was, in its way, productive: it provoked debates about the nature of the self, the precarious status of consciousness, and the relevance of human exceptionalism.

This article proposes a commentary on a little known novel, Les Amours du chevalier de Faublas, written between 1787 and 1790 by Jean-Baptiste Louvet de Couvray. The objective is to show a rivalry that existed in the second half of the eighteenth century between the novel and medical treatises as ways to document knowledge of the human mind. Taking as a point of departure the problematic polysemy of the term “esprit” in the eighteenth century, this article reveals how Couvray’s novel engages in therapeutic writing. Its main hypothesis is that as a fictional narrative, the novel discusses the madness of love and the disturbances of the mind.

END_OF_DOCUMENT_TOKEN_TO_BE_REPLACED

The British Psychological Society‘s History of Psychology Centre, in conjunction with UCL’s Centre for the History of the Psychological Disciplines, has announced the next two talks in its spring seminar series. On Monday March 13th Tom Quick will be speaking on “Disciplining Bergson: Cinematographs as Epistemic Devices, 1896-1922” and on March 20th Jacomien Prins will speak on “C.G. Jung’s Interpretation of Girolamo Cardano’s Dreams.” Full details follow below.

Henri Bergson’s use of the cinematograph as a metaphor for scientific epistemology had a major impact on twentieth-century conceptions of science: even today, many philosophers of science regard the relation between recording mechanisms and embodied observers as critical to our understanding of objective knowledge. Yet little is known about the extent to which Bergson’s characterization of cinematographs as epitomizing a pervasive ‘fragmentation’ of nature into lifeless ‘snapshots’ reflected actual scientific practice during the early twentieth century. This talk will address cinematographic experimentation by such contemporaries of Bergson as Charles Scott Sherrington, Hugo Münsterberg, and Max Wertheimer. In doing so, it will suggest that as well as expressing a broader trend towards the mechanical analysis of nature, cinematograph-centred experimentation contributed to a disciplinary divergence between psychological and physiological science during the first decades of the twentieth century. It will further highlight how this changing disciplinary structure came to haunt Bergson’s philosophy during the 1920s. Ironically, the prominence that Bergson gave to his to cinematographic metaphor prevented him from adapting his philosophy to a mode of scientific organization that grew up around the devices themselves.

Between 1936 and 1941, Carl Gustav Jung presented a seminar on children’s dreams and the historical literature on dream interpretation in Zurich. As part of the seminar Jung analysed twelve dreams of Girolamo Cardano. These sessions do not only give a peek into Jungian dream interpretation in practice, but also demonstrate how Jung used Cardano’s dream reports to corroborate his ideas about archetypes, the collective unconscious, synchronicity and the harmonization of opposites. In his book on dreams, titled Synesiorum somniorum omnis generis insomnia explicantes, libri IV (1562), Cardano defends the merits of dream interpretation and offers a philosophical explanation for his views. Central to his dream theory is the idea that the cosmos is a unified, harmonic and animated entity. The universal harmonic interrelations between all cosmic phenomena provide the basis for Cardano’s theory of dream interpretation. In this paper I will investigate how and why Jung used Cardano’s dream reports to revive the Renaissance notion of a unitary harmonic world as the eternal ground of all empirical being. Moreover, I will analyse why Jung was prepared to make a ‘salto mortale’ to appropriate Cardano’s dreams, while at the same time he considered him as ‘a free thinker who was more superstitious than primitives.’

The most recent issue of the Journal of the History of Medicine and Allied Sciences contains two articles that will be of interest to historians of psychology.

“’A Fine New Child’: The Lafargue Mental Hygiene Clinic and Harlem’s African American Communities, 1946–1958″ by Dennis Doyle and “Physiological Optics, Cognition and Emotion: A Novel Look at the Early Work of Wilhelm Wundt” by Claudia Wassmann.  Abstracts for both are below.

In 1946, the Lafargue Mental Hygiene Clinic, a small outpatient facility run by volunteers, opened in Central Harlem. Lafargue lasted for almost thirteen years, providing the underserved black Harlemites with what might be later termed community mental health care. This article explores what the clinic meant to the African Americans who created, supported, and made use of its community-based services. While white humanitarianism often played a large role in creating such institutions, this clinic would not have existed without the help and support of both Harlem’s black left and the increasingly activist African American church of the “long civil rights era.” Not only did St. Philip’s Church provide a physical home for the clinic, it also helped to integrate it into black Harlem, creating a patient community. END_OF_DOCUMENT_TOKEN_TO_BE_REPLACED

A call for papers that I thought might interest some of our readers.

Call for papers: ‘Blood, Sweat, and Tears. The Changing Concepts of Physiology from Antiquity into Early Modern Europe’ (Intersections, volume 21)

While the topic of anatomy, the structure of the body, has been the subject of considerable recent study, that of physiology, the theory of the normal functioning of living organisms, has received much less attention. To reach a better understanding of what was new in Early Modern Europe we need a thorough contextual interpretation of Ancient, Medieval ? including the Arabic tradition ? and Renaissance theories. END_OF_DOCUMENT_TOKEN_TO_BE_REPLACED