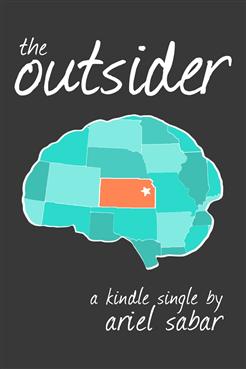 Journalist and author Ariel Sabar has extended his May 2013 Harper’s Magazine article, “Our Town: How Roger Barker made Oskaloosa, Kansas, His Laboratory” (see AHP post here), into a 25,000 word biography of the now little known psychologist. The biography, The Outsider: The Life and Times of Roger Barker, is now available for purchase as a Kindle Single at the Amazon store. Barker’s story is described on Amazon as follows:

Roger Garlock Barker was one of the most extraordinary — and least known — figures in the history of psychology. Just months after becoming chair of the psychology department at the University of Kansas in the late 1940s, Barker decamped with his family to the tiny backwoods town of Oskaloosa, population 725. It wasn’t escape Barker was after, but revelation. What Jane Goodall would do with chimpanzees in Tanzania, Barker wanted to do with his own species — homo sapiens — in its natural habitat. He hoped to understand nothing less than the “naturally occurring behavior” of “free-ranging persons.”

Barker stayed in Oskaloosa not for a one-off round of observations, but for a lifetime. He and his wife, Louise, joined its churches and social clubs. He sent his children to its schools. And for 25 years, Barker, his colleagues and even Louise and the three kids gathered meticulous data on the ebb and flow of everyday life in what he believed was a quintessential Midwestern town. He locked up his findings in the vault of an old bank building on the town square, in a rickety suite of offices that would rise to international renown as the “Midwest Psychological Field Station.”

The iconoclastic Barker saw his work as revolutionary, and by the early 1960s, establishment figures in psychology could no longer ignore his prodigious and painstaking output. Barker won hundreds of thousands of dollars in grant money and was decorated with the same prestigious awards given over the years to better-known luminaries like B.F. Skinner, Jean Piaget and Noam Chomsky. Margaret Mead visited Barker’s field station, as did Washington officials, foundation presidents, and scholars from universities as far afield as Norway and Australia.

But the shining new path Barker had illuminated for psychology faded suddenly into oblivion, the victim of forces Barker felt powerless to control.

The full Barker biography can be purchased online here.

AHP readers interested in the history of ecological and environmental psychology will be interested in a recent piece in Harper’s Magazine (unfortunately accessible in full only to subscribers). In “Our Town: How Roger Barker made Oskaloosa, Kansas, His Laboratory” writer Ariel Sabar describes Barker’s Oskaloosa based “behavior settings” research. He also tracks down one of his research participants, Raymond, the title character of Barker’s study One Boy’s Day. As Sabar describes,

Not long after moving to Oskaloosa, a town of 725 people in the hills of northeastern Kansas, Roger Barker, the new chair of the psychology department at the University of Kansas, approached a young couple who lived near him with a request: Might a group of researchers follow their seven-year-old son around for a day, documenting the boy’s every word and movement?

Jack Birch, a salesman at the town hardware store, and his wife, Joan, a clerk at the county courthouse, said yes, and on April 26, 1949, eight observers with timers and clipboards, working in half-hour shifts, assembled a minute-by-minute account of an ordinary day in the life of Raymond Birch.

Harper & Row published the report in 1951 as One Boy’s Day. An editor of The New York Times Magazine found the book interesting enough to pay Oskaloosa a visit. In an August 1951 article she rhapsodized about how Barker and his colleagues “brought child psychology out of the laboratory to study children in their natural habitat, much as a botanist goes into the fields to study flowers.” Townspeople knew the good that came from agricultural research stations, so they accepted “the idea that perhaps some day as much can be known about raising children as raising corn.”