The British Psychological Society‘s History of Psychology Centre, in conjunction with UCL’s Centre for the History of the Psychological Disciplines, has announced the first talk in its autumn seminar series. On Monday October 30th, Martin Liebscher will be speaking on Meditation, Imagination, Psychotherapy and Spiritual Practice in the 1930s. Full details below.

C. G. Jung and the Berneuchen Movement: Meditation and Active Imagination in Jungian Psychotherapy and Protestant Spiritual Practice in the 1930s

Active imagination is one of the methodical corner stones of Jungian therapy. Evolved from his self-experimental phase after 1913, Jung tried to establish a psychological and cultural framework for this method. In his university lectures of the late 30s Jung showed the parallels between active imagination and forms of spiritual meditation in Buddhism, Tantrism, and Christianity. During this period, he was in contact with leading clergy men of the Berneuchen circle, a movement that sought to reintroduce meditative spiritual practice in the German protestant church. Using hitherto unknown archival material I will follow the dialogue between Jung and main representatives of the Berneuchen movement and reveal the traces it left in his understanding of spiritual meditation and active imagination as well as in the practice of pastoral care of this protestant group.

The British Psychological Society‘s History of Psychology Centre, in conjunction with UCL’s Centre for the History of the Psychological Disciplines, has announced the next talk in its summer seminar series. On Monday July 31st Adrian Chapman, of Florida State University, will be speaking on “Kingsley Hall: An Island? Exploring Archival Accounts of Life at the Hall.” Full details below.

‘Kingsley Hall: An Island? Exploring Archival Accounts of Life at the Hall’

Kingsley Hall was radical therapeutic community established by R. D. Laing in 1965 (and that ran until 1970) in the East End of London. Here I turn to archival accounts of life at the Hall by residents and visitors. These accounts are from a book (never published) about Kingsley Hall and other communities established by the Laing network in the 70s. In his introduction to the book (the most stable title of which was Asylum: To Dwell in Strangeness), Laing engages in a debate with his former collaborator, David Cooper, who had spoken derisively of the Hall and other communities as “happy islands”, isolated zones of pseudo-freedom. Following a consideration of the aims, scope, history and marketability of the book project, I take the island metaphor as my starting point for exploring archival materials. This route allows me to trace significant connections and dissonances among several contributors to Asylum: To Dwell in Strangeness, and offers rich possibilities for interrogating the nature of the Hall and the radical psychiatry associated with R. D. Laing. In particular, I want to examine debates around the politics of the Kingsley Hall project; the relation of the Hall to its surrounding area in the East End; as well as the relation of Laing and his project to mainstream psychiatry, and to 1960s counterculture. The British Psychological Society‘s History of Psychology Centre, in conjunction with UCL’s Centre for the History of the Psychological Disciplines, has announced the next talk in its summer seminar series. On Monday June 19th Dee McQuillan will be speaking on “Excavating an English Psycho-Analyst: James Strachey‘s Papers and Work 1909-1945.” Full details below.

To what extent can studying a psychologist’s private life and personality contribute to the understanding of their work? In sharp contrast to his contemporaries, such as Edward Glover, John Rickman or Joan Riviere, James Strachey left an enormous quantity of manuscripts, mostly in the form of personal letters. While Strachey was not an avid writer in his own right — Ernest Jones complained about his lack of productivity — excavating the wealth of personal paperwork that he left presents an ideal opportunity to explore this question.

The British Psychological Society‘s History of Psychology Centre, in conjunction with UCL’s Centre for the History of the Psychological Disciplines, has announced the next talk in its summer seminar series. On Monday June 5th, Ernst Falzeder will be speaking on “The next talk in How Jung became the first President of the International Psychoanalytical Association.” Full details follow below.

It shocked Freud’s closest followers at the time that he wanted, in 1910, a Swiss gentile to become lifetime president of a new international organization of psychoanalysts. This talk sketches the background and repercussions of this “coup.”

The British Psychological Society‘s History of Psychology Centre, in conjunction with UCL’s Centre for the History of the Psychological Disciplines, has announced the next talk in its summer seminar series. On Monday May 8th Greg Eghighian (right) will be speaking on “From Crackpots to Survivors: How Contact With Aliens Was Pathologised.” Full details follow below.

‘From Crackpots to Survivors: How Contact With Aliens Was Pathologised‘

While the first reports of flying saucer sightings appeared in 1947, it was not until the 1950s that witnesses began claiming to have encountered extraterrestrial visitors. Throughout the fifties and sixties, the reports of “contactees” tended to emphasize the shyness and benign nature of extraterrestrials. Over the course of the 1970s, 1980s, and 1990s, however, the stories increasingly revolved around terrifying encounters with coercive aliens engaged in performing human experiments. And as the tales became more gruesome, psychiatrists and psychotherapists began playing a growing role in analyzing and counseling self-professed “abductees.” In this talk, I will discuss how and why this happened and some of the consequences it has had for contactees, clinicians, and critics. 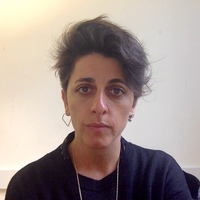 The British Psychological Society‘s History of Psychology Centre, in conjunction with UCL’s Centre for the History of the Psychological Disciplines, has announced the next talk in its spring seminar series. On Monday February 6th Silvana Vetö will be speaking on ‘Psychological Practices in ‘House of Juveniles of Santiago’, Chile 1929–1942’.

The British Psychological Society‘s History of Psychology Centre, in conjunction with UCL’s Centre for the History of the Psychological Disciplines, has announced the next talk in its autumn seminar series. On Monday December 12th Arthur Eaton (left) will be speaking on “History telling: writing a biography of psychohistory.” Full details follow below.

In June 1976 the American Psychiatric Association published a document entitled The Psychiatrist as Psychohistorian. In that report, a committee investigated the dangers – including the threat to United States national security – of a phenomenon called psychohistory. What is psychohistory? Why is it relatively unknown today? In this presentation, I will explore these questions and argue that psychohistory is best conceived of as an interdiscipline – born out of the marriage between two ‘parent’ disciplines: psychoanalysis and history. I will discuss the ‘rise and fall’ of the psychohistorical movement, highlight the conceptual difficulties of a hybrid discipline, and speak about my own search for psychohistory.

The British Psychological Society‘s History of Psychology Centre, in conjunction with UCL’s Centre for the History of the Psychological Disciplines, has announced the next talk in its autumn term. On Monday November 21st Elizabeth Lunbeck (left) will speak on “Narcissism in the Age of Trump.” Full details follow below.

How can we explain the improbable appeal of Donald Trump to a wide swath of the American populace? In this presentation, I propose that one explanation may be found in the ways in which he mobilises his narcissism – evident in his charisma and grandiosity as well as in a primitive inner world characterised by rage and envy – to connect to his followers and to effect their submission to him, holding out the promise of participating in his greatness. Drawing on psychoanalytic writings on malignant narcissism and on leadership, I offer a framework for beginning to understand his phenomenal rise.

Registration is not required and for more information contact Professor Sonu Shamdasani at UCL (020 7679 8154).

The British Psychological Society‘s History of Psychology Centre, in conjunction with UCL’s Centre for the History of the Psychological Disciplines, has announced the next talk in the Summer term. On Monday July 18th Fabio de Sio will be speaking on “The title is misleading: J.C. Eccles, the Waynflete Lectures and the dawn of the neurosciences in Britain (1945–1954).” Full details follow below.

The history of the neurosciences is usually cast as a cumulative process of discovery and theoretical innovation, leading to a veritable cultural revolution. The latter is accounted for in terms of an unstoppable growth of the brain, at the expense of the mind (or the soul), and as a progressive obliteration of old and fuzzy problems and entities (free will, mind, soul), traditionally associated with the explanation of human action. As a consequence, the neurosciences have been widely marketed not simply as the new model of scientific rationality (incorporating and integrating the bio- and psycho-disciplines), but also as the most suitable candidate to the title of ‘next science of Man’. This is based on the conflation between the growth of specialised knowledge and its interpretation in a wholly materialistic, brain-centric framework. This paper points at a different interpretation of the neurosciences as a cultural programme, based not on scientific revolution, interdisciplinarity and brain-centrism, but rather on tradition, harmonic cooperation between distinct disciplines (physiology, philosophy, introspective psychology) and a strong, reductionistic focus on the neurone as the basic level of interpretation. Through an analysis of the scientific and cultural endeavours of the physiologist and Nobelist J.C. Eccles FRS (1903–1997), his 1952 Lectures, The Neurophysiological Bases of the Mind: the Principles of Neurophysiology, I show how the New Science of the Brain was criticised by Eccles as a materialistic heresy, rooted in cultural prejudices, rather than on sound experimentation and proper scientific method. In parallel, I will show how the special brand of neurosciences heralded by Eccles was almost universally ignored by its critics. Finally, I wish to point at a whole network of neuroscience-related specialists (physiologists, psychiatrists, psychologists) and engaged intellectuals, who took Eccles’ programme seriously, and tried to consolidate, in the following decades, an alternative science of the mind/brain.

Directions: From the Torrington Place entrance to UCL, enter the campus on Malet Place.  After fifty metres, you will find Foser Court on the right hand side. Turn right under the underpass, and enter via the second door on the right.  The common room is straight ahead.