A number of recent articles in Centaurus may be of interest to AHP readers. Titles, authors, and abstracts follow below.

“Détente Science? Transformations of Knowledge and Expertise in the 1970s,” by Rüdiger Graf. Abstract:

Scrutinizing the multifaceted relationship between the history of science and the political, economic and cultural transformations of the 1970s, while acknowledging that ‘Cold War [social] science’ has proven to be a fruitful heuristic concept, the paper asks if– in a period decreasing confrontation –there was also a ‘détente [social] science’? First, it presents a short overview of the most significant transformations of the 1970s and sketches if and to what extent developments in the realm of science influenced them or even brought them about. Secondly, the perspective will be turned around. After developing the concept of Cold War Science in greater detail, the paper asks whether the changes of the 1970s influenced the development of the natural and social sciences. In particular, it analyzes their influence on the conceptions of knowledge and expertise that have been described as constitutive elements of Cold War Science. In conclusion, it tries to assess if these changes amount to anything that might be labelled fruitfully as détente science.

“Geography, Race and the Malleability of Man: Karl von Baer and the Problem of Academic Particularism in the Russian Human Sciences,” by Nathaniel Knight. Abstract:

The question of national specificity in science was vigorously debated in 19th century Russia and remains relevant to the geographical and cultural contextualization of scholarship. This article introduces the term academic particularism to denote this phenomenon and addresses it through an examination of the career, ideas and legacy of Karl von Baer in the fields of geography, ethnology and physical anthropology. The article traces significant shifts in Baer’s interests and views after his relocation to Russia in 1835 and identifies a cluster of key ideas present in Baer’s work in the mid-19th century that were further developed by subsequent scholars in the late 19th century and came to constitute a distinctive strain in the Russian human sciences.

“‘With the Risk of Being Called Retrograde’. Racial Classifications and the Attack on the Aryan Myth by Jean-Baptiste d’Omalius d’Halloy (1783–1875),” by Maarten Couttenier. Abstract: END_OF_DOCUMENT_TOKEN_TO_BE_REPLACED

The 2017 issue of Osiris is dedicated to Data Histories and includes a piece on big data in mid-twentieth century social science that may be of interest to AHP readers.

“Anthropology’s Most Documented Man, Ca. 1947: A Prefiguration of Big Data from the Big Social Science Era,” by Rebecca Lemov. Abstract:

“Big Data,” a descriptive term of relatively recent origin, has as one of its key effects the radically increased harnessing of ever-more-personal information accrued in the course of pedestrian life. This essay takes a historical view of the amassing and sharing of personal data, examining the genealogy of the “personal” and psychological elements inherent in Big Data through the case of an American Indian man who (the reigning experts claimed) gained the status of the most documented single individual in the history of modern anthropology. Although raised a traditional Hopi Indian in Oraibi, Arizona, Don Talayesva (1890–1985) gave over his life materials to scientists at prominent universities and constituted in and of himself a “vast data set” long before such practices were common. This essay uses this pioneering data set (partially preserved in the Human Relations Area Files and its web-based full-text database, eHRAF) to examine the distinctiveness of Big Data in relation to the personal, psychological realm; finally, a comparison is made with twenty-first-century data-collection practices of quantifying the self. 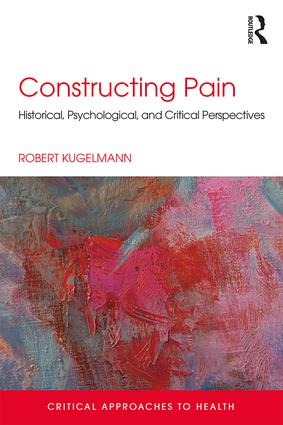 Now available from Routledge is Robert Kugelmann’s Constructing Pain: Historical, Psychological and Critical Perspectives. As described on the publisher’s website,

Everyone experiences pain, whether it’s emotional or physical, chronic or acute. Pain is part of what it means to be human, and so an understanding of how we relate to it as individuals – as well as cultures and societies – is fundamental to who we are.

In this important new book, the first in Routledge’s new Critical Approaches to Health series, Robert Kugelmann provides an accessible and insightful overview of how the concept of pain has been understood historically, psychologically, and anthropologically. Charting changes in how, after the development of modern painkillers, pain became a problem that could be solved, the book articulates how the possibilities for living with pain have changed over the last two hundred years.

Incorporating research conducted by the author himself, the book provides both a holistic conception of pain and an understanding of what it means to people experiencing it today. Including critical reflections in each chapter, Constructing Pain offers a comprehensive and enlightening treatment of an important issue to us all and will be fascinating reading for students and researchers within health psychology, healthcare, and nursing.

The volume was recently reviewed as part of History of the Human Sciences‘ book reviews initiative.

“Scientific expertise and the politics of emotions in the 1902 trial of Giuseppe Musolino,” by Daphne Rozenblatt. Abstract: END_OF_DOCUMENT_TOKEN_TO_BE_REPLACED

The New Books Network (NBN) has just released an interview with anthropologist Eugene Raikhel on his recently released monograph Governing Habits: Treating Alcoholism in the Post-Soviet Clinic. As NBN describes,

Alcoholism is a strange thing. That it exists, no one seriously doubts. But it’s not entirely clear (diagnostically speaking) what it is, who has it, how they get it, or how to treat it. The answers to these questions depend, apparently, on where you are, which is to say what culture you were born and raise in. Alcoholism and treatments for it in Country A might be very different from alcoholism and treatments for it in countries B, C, and D. Alcoholism is, well, relative.

This is one of the many thing I learned from reading Eugene Raikhel‘s fascinating book Governing Habits: Treating Alcoholism in the Post-Soviet Clinic (Cornell University Press, 2016). An anthropologist, Raikhel tells us the tale of how the Soviet discipline of “narcology”–the diagnosis and treatment of addiction– evolved during Soviet times and how it adapted after the USSR fell. I won’t spoil the story for you, but suffice it to say that Russians treated and continue to treat alcoholism quite differently that we do in the U.S., though that’s changing (AA has arrived in Russia, something we also discuss).