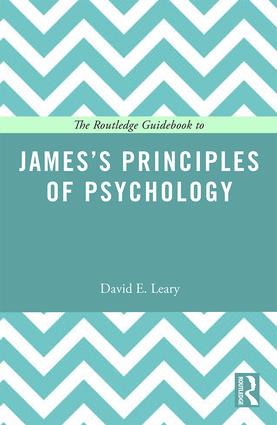 AHP readers may be interested in a newly available guidebook to William James’s classic Principles of Psychology written by David Leary. Full details below.

The Routledge Guidebook to James’s Principles of Psychology is an engaging and accessible introduction to a monumental text that has influenced the development of both psychological science and philosophical pragmatism in important and lasting ways. Written for readers approaching William James’s classic work for the first time as well as for those without knowledge of its entire scope, this guidebook not only places this work within its historical context, it provides clear explications of its intertwined aspects and arguments, and examines its relevance within today’s psychology and philosophy.

Offering a close reading of this text, The Routledge Guidebook to James’s Principles of Psychology is divided into three main parts:

It also includes two useful appendices that outline the sources of James’s various chapters and indicate the parallel coverages of two later texts written by James, an abbreviated version of his Principles and a psychological primer for teachers. This is essential reading for anyone who wants to understand this influential work.