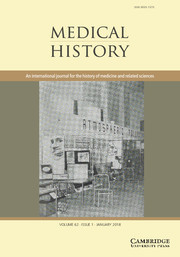 The January 2018 issue of Medical History is now available and includes several articles that may be of interest to AHP readers. Full details below.

The onset of nuclear warfare in Hiroshima and Nagasaki had far-reaching implications for the world of medicine. The study of the A-bomb and its implications led to the launching of new fields and avenues of research, most notably in genetics and radiation studies. Far less understood and under-studied was the impact of nuclear research on psychiatric medicine. Psychological research, however, was a major focus of post-war military and civilian research into the bomb. This research and the perceived revolutionary impact of atomic energy and warfare on society, this paper argues, played an important role in the global development of post-war psychiatry. Focusing on psychiatrists in North America, Japan and the United Nations, this paper examines the reaction of the profession to the nuclear age from the early post-war period to the mid 1960s. The way psychiatric medicine related to atomic issues, I argue, shifted significantly between the immediate post-war period and the 1960s. While the early post-war psychiatrists sought to help society deal with and adjust to the new nuclear reality, later psychiatrists moved towards a more radical position that sought to resist the establishment’s efforts to normalise the bomb and nuclear energy. This shift had important consequences for research into the psychological trauma suffered by victims of nuclear warfare, which, ultimately, together with other research into the impact of war and systematic violence, led to our current understanding of Post-Traumatic Stress Disorder (PTSD).

“Boyish Mannerisms and Womanly Coquetry: Patients with the Diagnosis of Transvestitismus in the Helsinki Psychiatric Clinic in Finland, 1954–68,” by Katariina Parhi. Abstract:

This article examines the case files of patients diagnosed with Transvestitismus [transvestism] in the Psychiatric Clinic of the Helsinki University Central Hospital in the years 1954–68. These individuals did not only want to cross-dress, but also had a strong feeling of being of a different sex from their assigned one. The scientific concept of transsexuality had begun to take form, and this knowledge reached Finland in phases. The case files of the transvestism patients show that they were highly aware of their condition and were very capable of describing it, even if they had no medical name for it. Psychiatrists were willing to engage in dialogue with the patients, and did not treat them as passive objects of study. Although some patients felt that they had been helped, many left the institution as frustrated, angered or desperate as before. They had sought medical help in the hope of having their bodies altered to correspond to their identity, but the Clinic psychiatrists insisted on seeing the problem in psychiatric terms and did not recommend surgical or hormonal treatments in most cases. This attitude would gradually change over the course of the 1970s and 1980s.

“Lechebnaia pedagogika: The Concept and Practice of Therapy in Russian Defectology, c. 1880–1936,” by Andy Byford. Abstract:

Therapy is not simply a domain or form of medical practice, but also a metaphor for and a performance of medicine, of its functions and status, of its distinctive mode of action upon the world. This article examines medical treatment or therapy (in Russian lechenie), as concept and practice, in what came to be known in Russia as defectology (defektologiia) – the discipline and occupation concerned with the study and care of children with developmental pathologies, disabilities and special needs. Defectology formed an impure, occupationally ambiguous, therapeutic field, which emerged between different types of expertise in the niche populated by children considered ‘difficult to cure’, ‘difficult to teach’, and ‘difficult to discipline’. The article follows the multiple genealogy of defectological therapeutics in the medical, pedagogical and juridical domains, across the late tsarist and early Soviet eras. It argues that the distinctiveness of defectological therapeutics emerged from the tensions between its biomedical, sociopedagogical and moral-juridical framings, resulting in ambiguous hybrid forms, in which medical treatment strategically interlaced with education or upbringing, on the one hand, and moral correction, on the other.