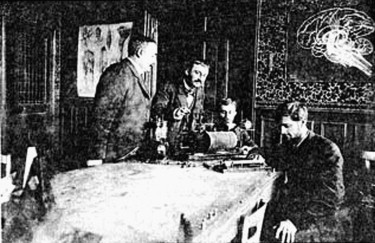 Evidence collected by Beck, Levinson, and Irons (2009) indicates that Albert B., the “lost” infant subject of John B. Watson and Rosalie Rayner’s (1920) famous conditioning study, was Douglas Merritte (1919–1925). Following the finding that Merritte died early with hydrocephalus, questions arose as to whether Douglas’s condition was congenital, rather than acquired in 1922, as cited on his death certificate. This etiology would imply that “Little Albert” was not the “healthy” and “normal” infant described by Watson and numerous secondary sources. Detailed analyses of Watson’s (1923) film footage of Albert suggested substantial behavioral and neurological deficits. The anomalies we observed on film of Albert B. are insufficiently explained by his hospital upbringing but are consistent with findings from newly discovered medical records of Douglas Merritte. These documents revealed that the infant suffered from congenital obstructive hydrocephalus, iatrogenic streptococcal meningitis/ventriculitis, and retinal and optic nerve atrophy. The medical history also indicates that Albert’s sessions with Watson occurred during periods when Douglas’s clinical course was relatively stable. Further inquiries found ample sources of information available to Watson that would have made him aware of Douglas/Albert’s medical condition at the times he tested the baby. Experimental ethics, Watson’s legacy, and the Albert study are discussed in light of these new findings.

“Alfred Binet and experimental psychology at the Sorbonne laboratory,” by Serge Nicolas and Rasyid Bo Sanitioso. The abstract reads,

Between 1892 and 1904, Alfred Binet (1857–1911) produced, in the psychology laboratory of the Sorbonne, a whole set of original works that still remains little known today. He integrated the laboratory, directed by the psychophysiologist Henry Beaunis (1830–1921), in 1891. We describe the circumstances that led Binet to take the direction of this laboratory in 1895 and present scientific investigations that were conducted there by Binet and his collaborators. For Binet, the laboratory was not narrowly limited to a set of rooms where experiments were conducted by means of sophisticated devices (experimental psychology), it was also a working area, regularly organized, where all the psychological documents were classified, whatever their origin (descriptive psychology). We show that Binet was a pioneer who is still little recognized in various areas of experimental psychology. Binet suffered, at the time, from the indifference of his contemporaries, but he especially regretted not being able to attract students to his laboratory due to the absence of diploma-offering programs.

“Teaching about mental health and illness through the history of the DSM,” by Joshua W. Clegg. The abstract reads,

Most students enter introductory or abnormal psychology courses with a naively realist concept of what constitutes mental illness, and most textbooks do little to complicate this understanding. The tendency to reify the various diagnostic categories of the mental health disciplines into stable and independent illnesses is ever present. However, a critical review of the development of successive versions of the Diagnostic and Statistical Manual of Mental Disorders (DSM) can help instructors demonstrate the evolving ways in which mental health and illness are conceptualized and can reveal the cultural, political, and economic forces that shape this process. This article provides a brief general review of this history, along with useful pedagogical questions and suggestions for integrating this material into the classroom.

In this article, we describe the content, sources, and history of the Archivo Histórico de la Facultad de Psicología (the Historical Archive for the History of Psychology) at the Universidad Autónoma de Madrid (UAM, Spain). This archive is the result of the task carried out by some professors of the Faculty of Psychology at UAM for the preservation and increase of sources for a history of psychology in Spain. Collections from the 19th to the 20th century were recovered because of the UAM effort and some other contributions. Most of the sources for a history of psychology in the Spanish context were unknown and nearly lost before Faculty of Psychology’s task. Among other projects, UAM archive is acquiring classical texts of psychology by buying facsimiles from different publishing houses and, what is more relevant, they guarantee access to the sources for research purposes.

This article discusses the events and considerations, both ‘distal’ and ‘proximal,’ behind the production of the author’s recent book, William Stern (1871–1938): A Brief Introduction to His Life and Works (Pabst Science Publishers, Germany, March, 2010). The ‘distal’ roots of the work lie in the advice given to the author by German and other European colleagues in the mid-1980s that examining Stern’s writing in some detail would likely prove fruitful. The more proximal roots lie in a series of public lectures that the author prepared and delivered in the capacity of Ernst Cassirer Guest Professor in the Institute for Philosophy at the University of Hamburg in 2004. It is explained that the primary intent of the book is to provide readers with a preliminary sense of the breadth of Stern’s contributions to psychology, and to suggest that his works might well deserve closer attention in the 21st century than they ever gained during the 20th.