AHP‘s readers may be interested in a podcast interview with historian Ann Fabian (left) produced by the New Books Network (as part of both the New Books in History and New Books in Science, Technology, and Society series). Fabian was interviewed about her 2010 book, The Skull Collectors: Race, Science, and America’s Unburied Dead, which details the near obsession with the skull exhibited by some in the scientific community in the nineteenth century.

The work of American Samuel Morton is the particular focus of Fabian’s book, and she recounts Morton’s efforts to hierarchically arrange the races according to their skull size and shape, which was thought to correspond with brain size and, more important still, degree of intelligence. Morton’s work was most famously criticized in Stephen Jay Gould’s The Mismeasure of Man, where Gould revisited Morton’s skull measurements and concluded that Morton fudged his data. This claim has since been challenged by others, most recently – and controversially – by a group of anthropologists who went back and remeasured Morton’s skulls and challenged Gould’s analysis.

As described by the University of Chicago Press,

When Philadelphia naturalist Samuel George Morton died in 1851, no one cut off his head, boiled away its flesh, and added his grinning skull to a collection of crania. It would have been strange, but perhaps fitting, had Morton’s skull wound up in a collector’s cabinet, for Morton himself had collected hundreds of skulls over the course of a long career. Friends, diplomats, doctors, soldiers, and fellow naturalists sent him skulls they gathered from battlefields and burial grounds across America and around the world. 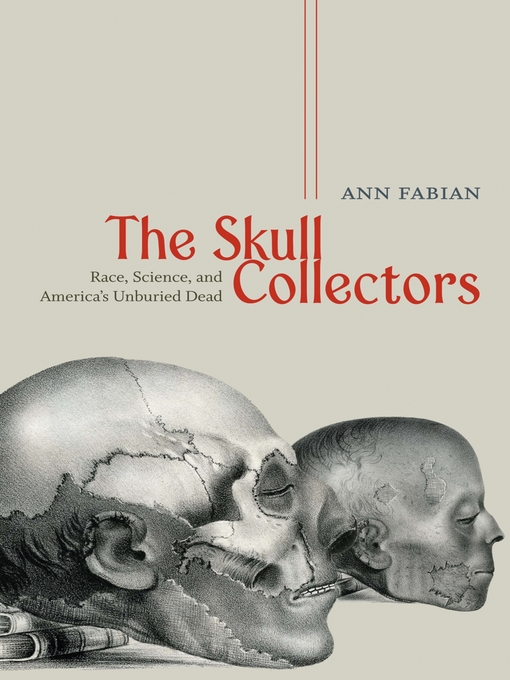 With The Skull Collectors, eminent historian Ann Fabian resurrects that popular and scientific movement, telling the strange—and at times gruesome—story of Morton, his contemporaries, and their search for a scientific foundation for racial difference. From cranial measurements and museum shelves to heads on stakes, bloody battlefields, and the “rascally pleasure” of grave robbing, Fabian paints a lively picture of scientific inquiry in service of an agenda of racial superiority, and of a society coming to grips with both the deadly implications of manifest destiny and the mass slaughter of the Civil War. Even as she vividly recreates the past, Fabian also deftly traces the continuing implications of this history, from lingering traces of scientific racism to debates over the return of the remains of Native Americans that are held by museums to this day.

Full of anecdotes, oddities, and insights, The Skull Collectors takes readers on a darkly fascinating trip down a little-visited but surprisingly important byway of American history.

The podcast episode with Fabian is itself described as follows:

What should we study? The eighteenth-century luminary and poet Alexander Pope had this to say on the subject: “Know then thyself, presume not God to scan; The proper study of mankind is man ” (An Essay on Man, 1733). He was not alone in this opinion. The philosophers of the Enlightenment–of which we may count Pope–all believed that humans would benefit most from a proper comprehension of temporal things, and most particularly humanity itself. For them, understanding humanity meant, first and foremost, understanding the human body. Naturally, then, the philosophes and their successors paid close attention to the body. They cut it up, took it apart, measured it and attempted to see how it worked. They were most interested in one part in particular–the human head. It was the seat of the human characteristic the Enlightenment scientists admired most: intelligence. If one could get a handle on the human cranium, then one would understand what it meant to be human. Or at least so they thought.

In her fascinating new book The Skull Collectors: Race, Science and America’s Unburied Dead (University of Chicago Press, 2010), Ann Fabian introduces us to a group of American philosophes who began to collect and study human crania in the first half of the nineteenth century. Not surprisingly, they took most of their cues from their European counterparts. They did, however, adapt craniology to a peculiar American context. Living in a social order in part built on supposed racial difference, the American skull collectors knew that what they said about Africans mattered. Their work could support the suppositions of slavery, or not. Moreover, living in a social order that was at the very time they were working involved in a quasi-genocidal campaign against indigenous peoples, the American skull collectors knew that what they said about Native Americans mattered as well. Their work might buttress the movement for Indian removal, or it might not. And being people of the “New World,” the American skull collectors knew that they were looked down upon by many of their European colleagues. They needed to collect skulls aggressively in order to establish craniology as an American science.

As one might expect, the American skull collectors were, by our lights, a strange bunch. Racists, imperialists, and nationalists to be sure. But also scientists, curators, and founders of physical anthropology. Thanks to Ann for bringing them to us in all their contradictory richness.

Listen to the podcast online here or download it from iTunes here.