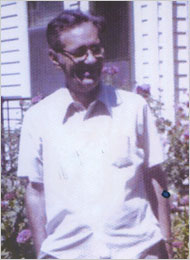 For decades he has been known by virtually every student of cognitive neuroscience by his initials alone: H. M. The story is familiar to anyone who has studied memory over the past 50 years: In the 1950s, as a young man, he had a life-threatening case of epilepsy. Portions of his brain, including the hippocampus, were surgically removed in an effort to stop the seizures. The operation was effective but, before long, an unexpected and terrible side effect of the operation was discovered. H. M. was no longer able to form new long-term memories. He could remember much of his life from before the surgery. His personality remained essentially intact, but after less than a minute he would forget anything that he had experienced. He could not even remember the doctors, nurses and other people responsible for his care whom he had met dozens of times. Then Brenda Milner of the Montreal Neurological Institute discovered that H. M. could improve at complicated motor tasks such a mirror drawing, even though he would not recall having done the task before. And thus began the modern movement in memory theory to divide this central mental faculty into a set of distinct memory “systems”: implicit and explicit, procedural and declarative, and so forth.

Over the past half-century H. M. has submitted himself to the experiments of any number of researchers who were eager to extract whatever information his own personal tragedy might be able to provide them. His own life was reduced to living with his parents, then with another relative, and finally in an institution for the past 30 years. But now, in death, his name has become public: Henry Molaison. He died of respiratory failure at the age of 82.

Benedict Carey of the New York Times has written an informative and surprisingly moving obituary of the man who, one could argue, created the modern discipline of cognitive neuroscience, not by his brilliance but, instead, by his mental disability.