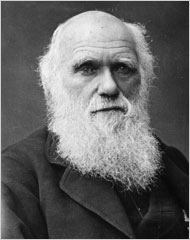 In this year before the year of the bicentennial of Darwin’s birth and the sesquicentennial of the publication of Origin of Species, everyone seems to be tring to get ahead of the pack in celebrating the discoverer of the theory of evolution by natural selection (see our earlier report on the Guardian‘s feature here).

Now the New York Times has gotten into the act. Olivia Judson, an evolutionary biologist at Imperial College London and prolific science journalist has started a multi-part series of columns about the life and influence of Charles Darwin. The first column, entitled “Darwinmania!” (about whether Darwin deserves all the credit he gets) is here. The second (on the many evolutionists who haven’t read Origin) and third (on the problems of the terms “Darwinism” and “Darwinian”) are here and here, respectively. There are more column to come.

1 thought on “Darwinmania in the New York Times”