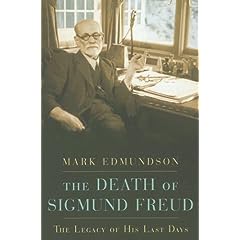 In 1938, Sigmund Freud escaped Nazi-controlled Vienna for London. It would be the final year of his life. In the last stages of the cancer that would ultimately take his life, Freud was allowed to take his beloved daughter, Anna, with him, but his sisters were made to stay, and would die in the camps. Although Freud did not live to see the war, the rise of the Nazis to power profoundly affected Freud’s view of humanity and civilization, confirming the dark themes that had begun to enter his work during the pointless slaughters of World War I, just over twenty years before.

A new book by U. Virginia English professor Mark Edmundson intensively studies these last few months of Freud’s life. Entitled The Death of Sigmund Freud: Fascism, Psychoanalysis and the Rise of Fundamentalism (Bloomsbury), the book is reviewed by John Gray in a recent issue of Literary Review. Gray writes:

Writing with great skill, Mark Edmundson shows Freud in all his contradictory humanity. He was shrewd and sober in his dealings with the world; but he also indulged in acts of bravery that could easily have been disastrous. When required to sign a document stating he had been well treated by the Nazis on his departure from Vienna, he could not resist adding, ‘I can most highly recommend the Gestapo to everyone.’ Freud’s courage went beyond defying tyranny. He also defied his own health. The cancer from which he suffered so cruelly in his final years was the result of his addiction to cigars, but he continued to smoke even when he was dying, after suffering over thirty operations…

The book’s focus is on Freud as a political thinker: What impact do unconscious urges have on civilization, in all its fragility? What is the effect on civil society of the instinctive human desire to submit to authority whether in matters of government, or the more expansive matters of religion?

Perhaps displaying a touch of defensiveness (or perhaps reflecting Edmundson’s), Gray opines that “The rise of fundamentalism has generated a moral panic, which is expressed in a hysterical condemnation of religion in all its varieties. Freud never shared this hysteria, or believed that religion could disappear from human life.” This misses the mark. It is the rise of fundamentalism itself that represents a moral panic, and Freud would have sided with those who resist this form of religious radicalism. Freud’s reluctant acceptance of the probable continuation of religion is more properly characterized as resignation than as endorsement. For Freud, religion serves to repress instincts that would ultimately tear civilization apart, but always carries with it, as do all forms of repression, the threat of psychopathology. Unlike the case of individual repression, however, religion threatens psychopathology on a mass scale that can topple a civilization just as effectively as the destructive instincts it was created to curb.

Nevertheless, the review is a thoughtful one that draws the reader in to the issues that dominated the last year of Freud’s life.

A tip-o’-the-hat to Mind Hacks for alerting me to this review.

Another interesting review of this book, written by the president of Wesleyan University, Michael S. Roth, was published in the LA Times.