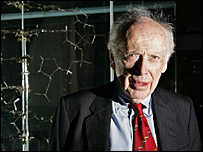 This story is only tangentially related to the history of psychology, but it was so striking that I had to pass it on. According to a BBC story, James Watson, who is most famous for having co-discovered the DNA molecule with Francis Crick, has had a planned lecture canceled at the Science Museum in London because he has claimed that Africans are inherently less intelligent than Europeans. Specifically, in an interview published in the Sunday Times, he said that he is:

“inherently gloomy about the prospect of Africa” because “all our social policies are based on the fact that their intelligence is the same as ours – whereas all the testing says not really”. He went on to say he hoped everyone was equal but that “people who have to deal with black employees find this is not true”.

The Science Museum’s responded with the statement that “we feel Dr Watson has gone beyond the point of acceptable debate and we are as a result cancelling his talk.”