Most of us who teach in psychology departments have heard the persistent myth (often from students) that humans only use 10% of their brains. This belief leads to all kinds of bizarre implications, like that people could do all kinds of extraordinary things (from being as smart as Einstein to having “psychic” powers) if they could only “unlock” the other 90%.

Of course, the myth if false, but like many myths, it is based on misinterpretations of actual neuropsychological findings, and many of the relevant studies were conducted by some of the most important figures — Karl Lashley and Wilder Penfield, among others. In September 2004, John McCrone wrote an article for the Science and Consciousness Review website in which he debunks the 10% myth. It is a great place to set students straight on the issue. It is an oldie, but a goodie.

News Update (23 July 2007): Regrettably, stories like this — about a French civil servant with a “tiny brain” — continue to cause problems of understanding.  And it’s no wonder.  (Look at the picture!)

Scans of the 44-year-old man’s brain showed that a huge fluid-filled chamber called a ventricle took up most of the room in his skull, leaving little more than a thin sheet of actual brain tissue….

Intelligence tests showed the man had an IQ of 75, below the average score of 100 but not considered mentally retarded or disabled, either. 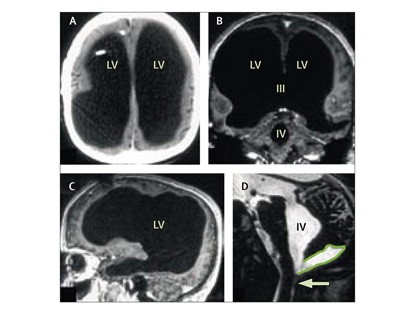 Yet, despite implicit appeals to the “10% myth” in explaining how someone with such an affliction could continue to function (mostly) normally, it seems to me that the key lesson in the story is about the brain’s plasticity:

“If something happens very slowly over quite some time, maybe over decades, the different parts of the brain take up functions that would normally be done by the part that is pushed to the side,” commented Dr. Max Muenke, a pediatric brain defect specialist at the National Human Genome Research Institute.

In other words, the take-away message is that — in the face of continuing selection pressures — the brain can adapt.

A CT scan suggested that the patient had a largely fluid-filled skull with less than a few millimetres of grey matter, but with a IQ of 126 and a first class maths degree. Lorber had many other cases that he said illustrated similar effects.